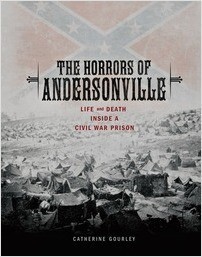 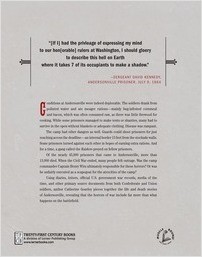 The Horrors of Andersonville

Life and Death Inside a Civil War Prison

The Confederate prison known as Andersonville existed for only the last fourteen months of the Civil War―but its well-documented legacy of horror has lived on in the diaries of its prisoners and the transcripts of the trial of its commandant. The diaries describe appalling conditions in which vermin-infested men were crowded into an open stockade with a single befouled stream as their water source. Food was scarce and medical supplies virtually nonexistent. The bodies of those who did not survive the night had to be cleared away each morning. Designed to house 10,000 Yankee prisoners, Andersonville held 32,000 during August 1864. Nearly a third of the 45,000 prisoners who passed through the camp perished. Exposure, starvation, and disease were the main causes, but excessively harsh penal practices and even violence among themselves contributed to the unprecedented death rate. At the end of the war, outraged Northerners demanded retribution for such travesties, and they received it in the form of the trial and subsequent hanging of Captain Henry Wirz, the prison’s commandant. The trial was the subject of legal controversy for decades afterward, as many people felt justice was ignored in order to appease the Northerners’ moral outrage over the horrors of Andersonville. The story of Andersonville is a complex one involving politics, intrigue, mismanagement, unfortunate timing, and, of course, people – both good and bad. Relying heavily on first-person reports and legal documents, author Catherine Gourley gives us a fascinating look into one of the most painful incidents of U.S. history.

“This volume details the history of the Confederate prisoner-of-war camp at Andersonville, Georgia, using official records and the personal recollections of both Confederate and Union soldiers. The book also provides biographical information about Captain Wirz, the camp commandant and only person charged with crimes connected with the camp. Period photographs, art, and numerous sidebars help shed light on the horrible conditions at Andersonville.” —The Horn Book Guide

“This well-researched book describes the notorious Confederate prison camp known as Andersonville, where more than 45,000 Union soldiers lived in deplorable conditions and some 13,000 died, beginning in 1864. . . Illustrated with many captioned photos and prints and enlivened with quotes from firsthand accounts, this book provides a balanced, informative introduction to Andersonville.”
—Booklist

Catherine Gourley is an award-winning author and editor of books for young adults. She is the national director for Letters about Literature, a reading-writing promotion program of the Center for the Book in the Library of Congress. In addition, she is the curriculum writer for The Story of Movies, an educational outreach program on film study and visual literacy in the middle school developed by The Film Foundation in Los Angeles. A former editor of Read magazine, Gourley has written more than 20 books. Her recent five-book series—Images and Issues of Women in the Twentieth Century (Twenty-First Century Books)—was named to Booklist's Top 10 Series Nonfiction list, and individual titles received starred reviews from School Library Journal. The series also received accolades from the Amelia Bloomer Project Recommended Feminist Books for Young Readers and the National Council for the Social Studies (NCSS) / Children's Book Council (CBC) Notable Social Studies Trade Books for Young People.