Catherine Gourley is an award-winning author and editor of books for young adults. She is the national director for Letters about Literature, a reading-writing promotion program of the Center for the Book in the Library of Congress. In addition, she is the curriculum writer for The Story of Movies, an educational outreach program on film study and visual literacy in the middle school developed by The Film Foundation in Los Angeles.
A former editor of Read magazine, Gourley has written more than 20 books. Her recent five-book series—Images and Issues of Women in the Twentieth Century (Twenty-First Century Books)—was named to Booklist’s Top 10 Series Nonfiction list, and individual titles received starred reviews from School Library Journal. The series also received accolades from the Amelia Bloomer Project Recommended Feminist Books for Young Readers and the National Council for the Social Studies (NCSS) / Children’s Book Council (CBC) Notable Social Studies Trade Books for Young People.

The first books I enjoyed reading on my own in the quiet of my bedroom were the Trixie Belden mystery series.  But I also loved reading the illustrated encyclopedia called GOLDEN BOOK.

I have so many favorite authors that it is difficult the select just three. But I would say that the short stories of Eudora Welty taught me a great deal about how to use language effectively. I also liked very  much the works of John Gardner. The works of Susan Cooper and Lois Lowry are also inspiring.

I love researching and so discovering interesting stories about real people who are not necessarily famous but do extraordinary things. I like telling stories and creating an atmosphere for that story, a time and a place. Being an author is like traveling through time and space.

Please don’t think you need to dumb down your writing. Young readers, if interested in what you have to say and how you say it, will reach for your words. 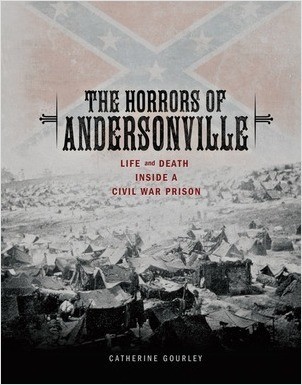 The Horrors of Andersonville

Browse all titles by Catherine Gourley →