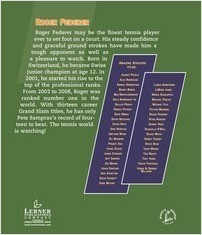 Roger Federer may be the finest tennis player ever to set foot on a court. His steady confidence, quiet power, and graceful ground strokes have made him a tough opponent as well as a pleasure to watch. Born in Switzerland, he wowed the junior tennis world, becoming Swiss junior champion at age 12. In 2001, he started his rise to the top of the professional ranks. By 2003, Roger was ranked number one in the world and has never looked back. With twelve career Grand Slam titles, he has only Pete Sampras’s record of fourteen to beat. The tennis world is watching!