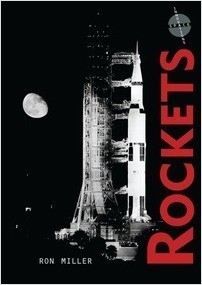 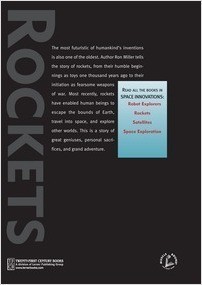 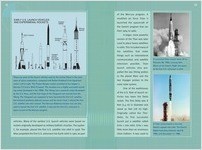 From the Series Space Innovations

The most futuristic of humankinds inventions is also one of the oldest. Author Ron Miller tells the story of rockets, from their humble beginnings as toys one thousand years ago to their initiation as fearsome weapons of war. Most recently, rockets have enabled human beings to escape the bonds of Earth, travel into space, and explore other worlds. This is a story of great geniuses, personal sacrifices, and grand adventure.

“The chapters are crowded with photographs and illustrations of rockets and those who made them. The text is clear and understandable. . . This is an attractive book, with a striking cover of a rocket preparing for a night launch. It would be a good supplement for middle school science lessons. It might even spark an interest in a budding space scientist.”
—NSTA

“These books are packed with information about the history, technology, pioneers, and applications of their subjects.”
—The Horn Book Guide

“Part of a new series, this volume joins others on satellites, robot explorers, and a discussion of space exploration. Here Miller describes the history of rocket science, beginning in ancient China, where saltpeter, sulfur, and charcoal were first combined to create gunpowder. Although the Chinese tried to use gunpowder and rockets in warfare, inability to aim kept them from being truly useful as weapons, relegating them to being used largely for entertainment. Europeans were using gunpowder as early as 1249 but had similar problems adapting it to warfare. As time and technology progressed, though, rockets and gun­powder played a crucial role in war. Miller highlights many of these moments, such as the writing of ‘The Star Spangled Banner’ by the light of shooting rockets. Finally the author describes the use of rockets in space flight in the past one hundred years. The stories of the development of rockets through time are complemented by short biographies of important scientists such as Robert Goddard, stories of young model rocket makers, and sidebars explaining the science that makes rockets work.The book is generally readable for any high school-level student, although some might struggle with the science concepts as the book progresses and becomes more technical. It is a good choice for high school libraries, as well as for boys who are interested in science and nonfiction. Additional serried books cover satellites, space exploration, and robot explorers.”
—VOYA