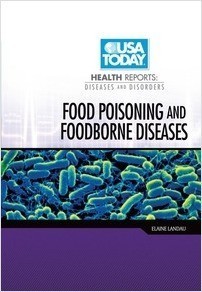 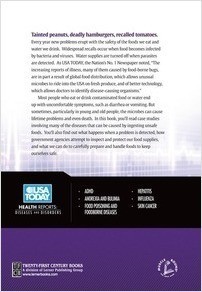 From the Series USA TODAY Health Reports: Diseases and Disorders

Tainted peanuts, deadly hamburgers, recalled tomatoes. Every year new problems erupt with the safety of the foods we eat and water we drink. Widespread recalls occur when food becomes infected by bacteria and viruses. Water supplies are turned off when parasites are detected. As USA TODAY, the Nation’s No. 1 Newspaper noted, “The increasing reports of illness, many of them caused by food-borne bugs, are in part a result of global food distribution, which allows unusual microbes to ride into the USA on fresh produce, and of better technology, which allows doctors to identify disease-causing organisms.”

Most people who eat or drink contaminated food or water end up with uncomfortable symptoms, such as diarrhea or vomiting. But sometimes, particularly in young and old people, the microbes can cause lifetime problems and even death. In this book, you’ll read case studies involving many of the diseases that can be caused by ingesting unsafe foods. You’ll also find out what happens when a problem is detected, how government agencies attempt to inspect and protect our food supplies, and what we can do to carefully prepare and handle foods to keep ourselves safe.

“For a tight budget, these will be a great substitute for larger, costly health books.” —Library Media Connection

“This series mimics USA Today in its readability, though the books’ length and breadth render them more suited to fact-finding than to pleasure reading. The language is straightforward and objective.” —School Library Journal, Series Made Simple

“A highly readable and succinct review of foodborne diseases and how they may be prevented.” —Science Books & Films

Developed in partnership with USA TODAY, one of the most read newspapers in the world and the No. 1 newspaper in the United States, this easy-to-read medical series focuses on some of today’s most topical diseases, disorders, and… View available downloads →