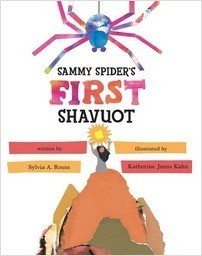 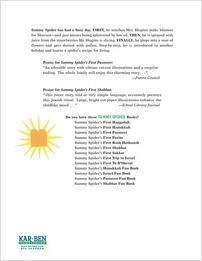 “What’s a recipe?” Sammy Spider asks his mother as he watches Mrs. Shapiro make blintzes for Shavuot. As Sammy follows the holiday preparations, young readers will learn how the Torah, which was given on Shavuot, is also a “recipe for life.”

Spider Sammy learns about the Jewish holiday of Shavuot. During the Shapiro family’s preparations, curious Sammy is almost burnt by cooking oil, splashed with strawberry juice, and covered with pollen while he learns about such customs as making blintzes. The brightly colored but awkward collage illustrations include some inconsistencies. Mrs. Shapiro’s blintz recipe is appended.

In this addition to the series, Sammy the spider learns about Shavuot, which “celebrates the time when God gave the Torah to Moses.” He watches as the Shapiro family makes blintzes and reads parts of a small Torah scroll. The brightly colored paper-collage illustrations have child appeal, but may not be enough to over-come the nonexistent story line. As in the previous books, the text is centered on a concept, such as counting, col-ors, or shapes. This time, the words “first,” “then,” and “now” are repeated as Sammy chats with his mother and learns the concept of sequencing while they observe the holiday preparations. Jewish educators often bemoan the dearth of picture books about this particular celebration, but only those wishing to complete their set of the Sammy Spider tales will want to add this one to their collection. Barbara Diamond Goldin’s A Mountain of Blintzes (Harcourt, 2001) is a better choice for Shavuot sharing.

Sylvia A. Rouss is an award-winning author and early childhood educator, and the creator of the popular Sammy Spider series, celebrating its 25th anniversary with over half a million Sammy Spider books sold. She lives in California.