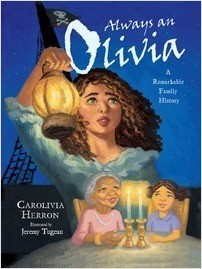 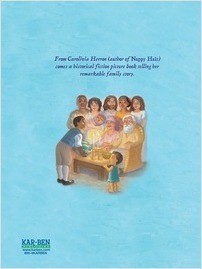 An elderly black grandmother passes on the story of the family’s Jewish origins to her young granddaughter, Carol Olivia. As family members flee the Spanish Inquisition, are kidnapped by pirates and eventually sail to America, one daughter in each generation is given the name Olivia, from the Hebrew Shulamit meaning “peace,” to honor the Jewish part of their ancestry. Critically-acclaimed author Carolivia Herron (Nappy Hair) shares this engaging, multicultural tale is based on her own family’s heritage.

“This will be useful for classroom studies and discussions with a rarely told perspective on families and coming to America.”
—Kirkus Reviews

“The story is written in colorful, poetic language that would capture even the youngest readers. The illustrations are realistic and vibrant with bold colors.”
—Library Media Connection

Herron offers an intriguing children’s story about a family that has a mixed background, based on her own multi-cultural family tree. Half of the family left Spain due to the Spanish Inquisition and then moved to Portugal. They lived in Portugal for many years while keeping their Jewish religion a secret. After a time, they moved to Venice, Italy, where they settled for many generations. One of the daughters was kidnapped because the kidnappers felt that a good ransom would be paid due to her Jewish background. The girl, Sarah Shulamit, was able to escape the kidnappers with the help of another kidnapped person by the name of James. In 1805 they settled in the United States. James and Sarah settled in Georgia in an area that had many families from West Africa. The families mixed, so their heritage became Black and Jewish. One name, Olivia, was always passed down to mother and daughter. Carol Olivia, the story’s modern-day protagonist, is lucky enough to hear this information from her great grandmother. This inspiring story can help children recognize the importance of culture and customs. It reinforces the need to keep the stories as well as family traditions alive. Always an Olivia is a great resource for an elemen-tary school class on many levels.

“Tugeau’s vibrant paintings highlight the various moods of the story, from the fear of the Inquisition to the warmth of a family dinner, from the darkness of the pirate ship to the vitality of the Geechee community. This beautifully illustrated offering skillfully shows the diversity of the American Jewish community.”
—School Library Journal

To explain why each generation of their family has an Olivia, an African American woman tells her great-granddaughter about their Jewish family’s journey across the globe to escape reli-gious persecution. Soft paintings add subtle intensity to this story highlighting the importance of traditions to pre-serve history. An author’s note elaborates on discrimination against Jews.

Jeremy Tugeau graduated from Syracuse university with a degree in Illustration. He has illustrated many children's books including Always an Olivia and Nathan Blows Out the Hanukkah Candles. He lives in Ohio with his wife and children.