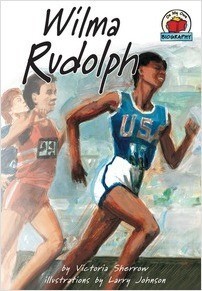 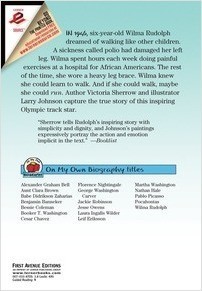 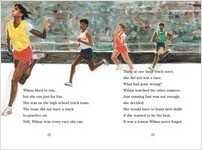 In 1946, six-year-old Wilma Rudolph dreamed of walking and playing like other children, but a sickness called polio had damaged her left leg. Wilma spent hours each week doing painful exercises at a hospital for African American patients. The rest of the time, she was forced to wear a heavy and cumbersome leg-brace. Still, Wilma never gave up. She knew she could walk again, and if she could walk, maybe she could run. Author Victoria Sherrow tells how Wilma Rudolph’s determination led her to the 1956 and 1960 Olympics where she gained fame as a champion runner. Larry Johnson’s rich illustrations help to capture this true story of heroic strength and fearlessness.

“Sherrow tells Rudolph’s inspiring story with simplicity and dignity, and Johnson’s paintings expressively portray the action and emotion implicit in the text. A fine addition to library collections, even those with other Rudolph biographies on the shelf.”
—Booklist

“Colorful illustrations are used throughout. . . The short sentences and plentiful illustrations will help make this biography accessible. . . readers will find this an inspiring story.”
—Kirkus Reviews