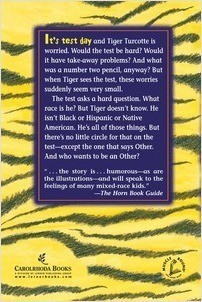 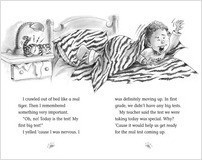 Seven-year-old Tiger Turcotte has been dreading going to class because today is the day he has to take The Test. Armed with his lucky tiger-striped pencils, Tiger’s ready. The first five questions go okay—they’re easy—and the rest of the test isn’t so bad either, but Tiger’s scared. He left question number six blank. He didn’t know which little bubble to fill in—was he supposed to pick the Black bubble, the Hispanic bubble, the Native American bubble, or Other? He’s sure that no one else in his class had the same problem, but he doesn’t want them to find out he’s different! With a little help from his dad and his teacher, Tiger discovers that appearances can be deceiving, and maybe he’s not so different after all.

“Already nervous about his first big test, multiracial second-grader Tiger gets upset when he doesn’t know what answer for the question about his race. Though didactic, the story is also humorous – as are the illustrations – and will speak to the feelings of many mixed-race kids.”
—The Horn Book Guide

“Though never dismissing her protagonists worries, Flood takes a low-key approach to this common situation, neatly demonstrating that the adults don’t always have all the answers either, while making the point that people are more important than categories. Tiger himself is an endearing and individual little guy, who’s good company in his own right; maybe he’ll come roaring back in a sequel.”
— The Bulletin of the Center for Children’s Books

Amy Wummer has illustrated more than 50 children's books. She uses pencils, watercolors, and ink―but not the invisible kind.