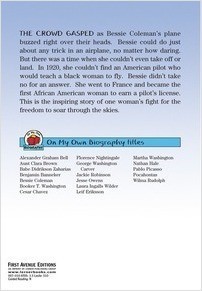 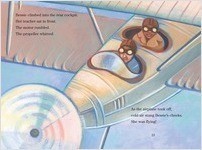 High in the sky, Bessie Coleman could soar like a bird. She was free—at least until she landed. As a black woman in the 1920s, she wasn’t allowed to learn how to fly. Forced to travel to France to learn, she became the first African American woman to earn her pilot’s license. Whether she was wing-walking, giving a speech, parachuting, or flying, Coleman inspired people with her bravery and resolve.

“Newly independent readers will be inspired by Bessie Coleman’s determination to learn to fly at a time when neither women nor people of color were allowed to do so in the United States.”
—The Horn Book Guide