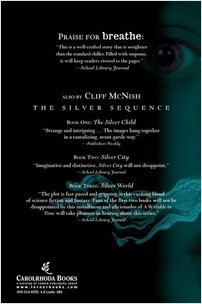 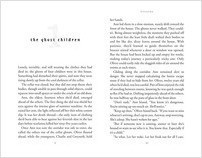 Jack is not a normal boy. He can talk to ghosts. In his new home, an aging farmhouse, he meets the Ghost Mother, a grief-stricken spirit who becomes very attached to him…too attached. He learns that the Ghost Mother is preying in the cruelest imaginable way on four child ghosts who are trapped in the house, stealing their energy to sustain her own. Before Jack can figure out how to help them, the Ghost Mother takes possession of his real mother’s body. Jack wants to fight back, but he has severe asthma and risks fatal attacks with any physical exertion. It will take all his resources, and his mother’s as well, to fight off the Ghost Mother and save the ghost children from a horrible fate.

“This is a well-crafted story that is weightier than the standard chiller. Filled with suspense, it will keep readers riveted to the pages.”
—School Library Journal

“McNish’s vivid descriptions of the ghosts and Jack’s interaction with them is so real that just the thought of the icy coldness of the malevolent Ghost Mother’s touch will make the reader shudder. . . Even the most reluctant reader will not be able to put this one down.”
—VOYA

Written when he was almost forty, Cliff McNish's Doomspell Trilogy won him an instant and avid readership and has been published in 19 languages around the world. Since then, he has continued to write fiction, including The Silver Sequence, Breathe, and Angel, and has been hailed as a "great new voice in writing for children" (The Bookseller). Mr. McNish was born in northeastern England. He enjoys playing golf, walking up mountains, and eating as much hot and spicy food as possible. He is married and has a teenage daughter, whose demand for a scary story led to the idea for his first book.