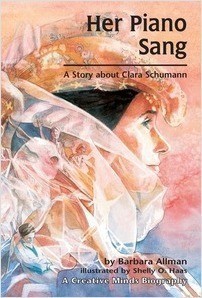 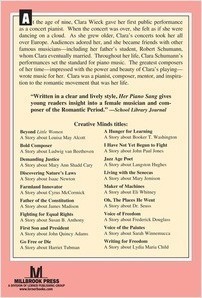 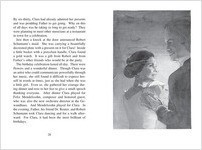 A Story about Clara Schumann

At the age of nine, Clara Wieck gave her first public performance as a concert pianist. She played beautifully. When the concert was over, she felt as if she were dancing on a cloud. As she grew older, Clara’s concerts took her all over Europe. Audiences adored her, and she became friends with other famous musicians—including her father’s student, Robert Schumann. Robert and Clara fell in love and eventually married. Robert took some of Clara’s melodies and shaped them into compositions, and Clara performed his pieces, introducing them to new audiences. Throughout her life, Clara Schumann’s performances set the standard for piano music. The greatest composers of her time—impressed with the power and beauty of her playing—wrote music for her. Clara was a pianist, composer, and mentor, as well as an inspiration to the romantic movement that was her life. She made the piano sing.

“Written in a clear and lively style. A worthwhile purchase.” —School Library Journal