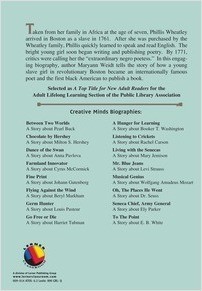 A Story about Phillis Wheatley

Taken from her family in Africa at the age of seven, Phillis Wheatley arrived in Boston as a slave in 1761. After she was purchased by the Wheatley family, Phillis quickly learned to speak and read English. The bright young girl soon began writing poetry. By 1771, her poems had been published in newspapers all over the colonies, and critics were praising the “extraordinary negro poetess.” In this engaging biography, author Maryann Weidt tells the story of how a young slave girl in revolutionary Boston became an internationally famous poet and the first black American to publish a book.

“. . .provides excellent historical background, explaining in simple, well-written text the concept of slavery and the political conflicts leading up to the Revolutionary War. . . a welcome introduction. . .”
—Booklist