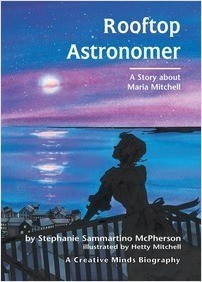 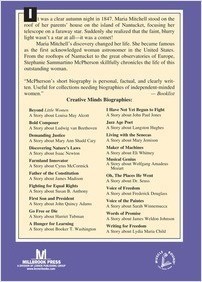 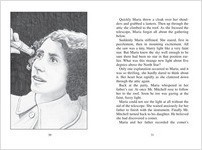 A Story about Maria Mitchell

It was a clear autumn night in 1847. Maria Mitchell stood on the roof of her parents’ house on the island of Nantucket, focusing her telescope on a faraway star. Suddenly she realized that the faint, blurry light wasn’t a star at all—it was a comet! Maria Mitchell’s discovery changed her life. She became famous as the first acknowledged woman astronomer in the United States. During her many travels, Maria came to realize that most women did not have the same opportunities as men. She thought that women should be encouraged to be anything they wanted to be. This was a lesson she taught her students as an astronomy professor at Vassar College and a message she stressed as the president of the Association for the Advancement of Women. From the rooftops of Nantucket to the great observatories of Europe, Stephanie Sammartino McPherson skillfully chronicles the life of this outstanding woman.

“. . .sure to hold a young reader’s attention.”
—Science Books & Films