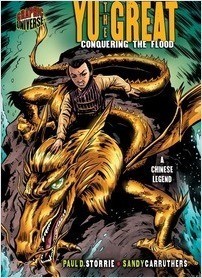 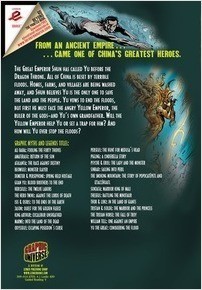 Conquering the Flood [A Chinese Legend]

This graphic novel tells the legend of Yu the Great, a Chinese hero from the twenty-first century B.C. Some scholars believe Yu actually existed and that he founded the Xia Dynasty, the first Chinese empire described in historical records. Some later Chinese texts describe Yu as a kind and strong emperor whose engineering projects saved China from frequent floods. But in Chinese legend, as in this book, Yu is descended from the gods and born from a golden dragon. He saves China from floods by using magical soil to plug underwater springs, with the help of a tortoise, an owl, and a dragon.

“Children looking for folktales from outside the Greco-Roman and Nordic traditions wiII enjoy this Chinese myth, adapted by comics-writing veteran Storrie and illustrated by experienced comics-artist Carruthers. The volume maintains the tone and look of an old Chinese tale (Storrie cites his sources at the end) while imbuing it with the dynamic art and feel of a contemporary comic book.”
—Booklist

“This book will be great for those students who are accelerated and looking for more information outside the typical textbook.”
—The Graphic Classroom