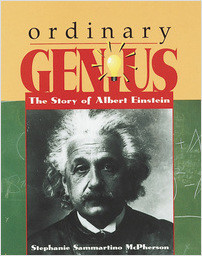 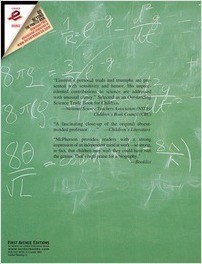 The Story of Albert Einstein

What do you think of when you hear the name Albert Einstein? Perhaps you picture an old man with rumpled clothing, a halo of wild white hair, and an impish grin. You might know that he developed two of the most important and complex theories in science, the theories of relativity. You probably think of the word genius. Albert Einstein may have been a genius—but he was also much more than that. Einstein was a man who hated violence and took a stand for peace in the world. He was a man who was proud to be Jewish and worked to ensure a better life for his people. And he was a man who never took himself—or his fame—too seriously, and only wanted to be treated like an ordinary person and live an ordinary life.

“The reader learns about Albert Einstein’s beliefs and private life. His unprecedented contributions to science were addressed with unusual clarity.”
—Authors note

“The descriptions of young Albert’s difficulties in school, which will enthrall young readers, embody what the author does particularly well throughout this book – depict Einstein as a person both like and unlike others. McPherson provides readers with a strong impression of an independent mind at work – so strong, in fact, that children may wish they could have met the genius. That’s high praise for a biography.”
—Booklist