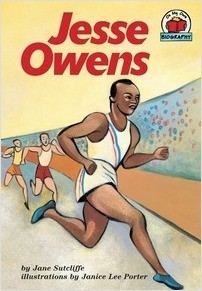 From the time he was a young boy on a farm in Alabama until he received his fourth Olympic gold medal in Berlin in 1936, all Jesse Owens wanted to do was run. Overcoming sickness, poverty, and racial discrimination, Jesse worked hard, shattered many track and field records, and earned countless medals and trophies. But perhaps his greatest and most important accomplishment came when he stood up to the hatred of Adolf Hitler and proved that the belief in the superiority of German athletes was false. This beautifully illustrated and simply told biography tells the inspirational story of a man with strength of spirit and heart.

Jane Sutcliffe was born in Providence, Rhode Island, in the days when library fines were a penny. One of her earliest memories was the weekly trip to the local library with her father. She's loved books ever since. Her childhood was fairly average. In fact, it was so average that all her friends had pretty much the same childhood. They all went to the same school, and attended the same church on Sundays. Their mothers all called them home to supper at the same time. On weekends they visited grandmothers and aunties who spoke a different language when they didn't want the children to understand. To live any differently seemed exciting and exotic to her, so she began to read biographies, just to get a peek at how other people lived day to day, in different times and places. When she was 10 or 11, she spent a whole year reading nothing but biographies. So it wasn't a big surprise when Jane began to write them, too. So far she's written nearly two-dozen biographies as well as other nonfiction books and articles. She loves everything about writing: the research, the sweating over the perfect word or phrase or sentence, the joy in the finished product. But she especially loves the time she spends visiting readers at schools. She lives in rural Connecticut with her husband, Skip, their dog Willy, assorted cows and goats—and lots and lots of books. 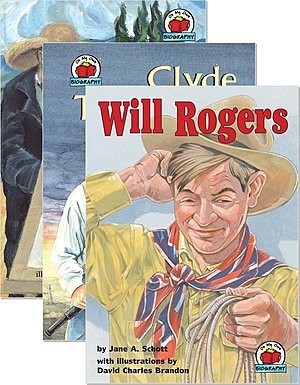