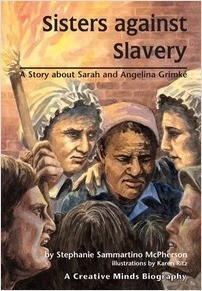 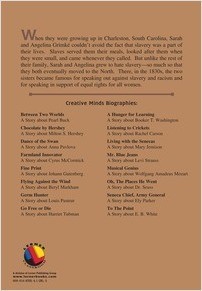 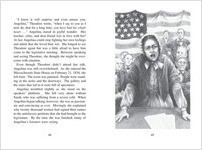 A Story about Sarah and Angelina Grimké

Sisters against Slavery recounts the lives of Sarah Grimke and Angelica Grimke Weld. These daughters of wealthy Southern planters and slave owners renounced slavery in the 1830’s. Through their writings and through a series of lectures delivered in the North, the sisters became famous for their views on slavery and women’s rights. Although the sisters were active as speakers and essayists for a relatively short time in the 1830s and 1840s, they reached tens of thousands of people, influenced American views on slavery, and were an inspiration to women’s rights leaders for decades to come.

“McPherson’s thoughtful exposition should win these heroines a following. When procrastinating report writers find all the Harriet Tubman and Frederick Douglass books checked out, hand them a copy of Sisters and promise them. . . a rewarding read.”
—The Bulletin of the Center for Children’s Books