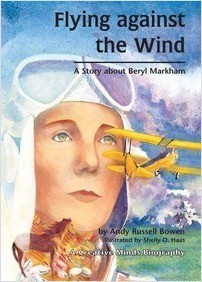 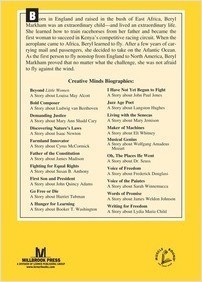 Flying Against the Wind

A Story about Beryl Markham

Born in England and raised in the bush of East Africa, Beryl Markham was an extraordinary child—and lived an extraordinary life. She learned how to train racehorses from her father and became the first woman to succeed in Kenya’s competitive racing circuit. When an airplane came to Africa, Beryl learned to fly. After a few years of carrying mail and passengers, she decided to take on the Atlantic Ocean. As the first person to fly non-stop from England to North America, Beryl Markham proved that no matter what the challenge, she was not afraid to fly against the wind.

“This will appeal to aviation history buffs and those looking for stories about strong women.”
—Booklist