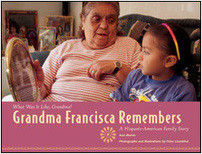 Eight-year-old Angelica lives in an apartment in San Francisco with her parents, Anna and Tony. Her Grandma Francisca lives next door. Angelica enjoys spending time with her grandmother after school and on weekends. From Francisca, Angelica learns much about the family and its traditions and values. Grandma Francisca is an active woman who has many different jobs. She grew up in New Mexico with eight brothers and sisters. Her parents were born in the United States, but her grandparents came from Spain. Often when Angelica visits her grandmother, Francisca tells her about her childhood. She plays games with Angelica and teachers her Spanish phrases. Sometimes she and Angelica cook favorite recipes together.

“Teachers, grandparents, and parents will enjoy sharing this with children of all cultures and then moving on to their own family memories.”
—Kirkus Reviews