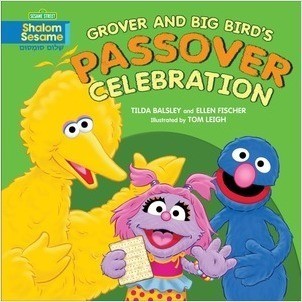 “Why is this book different from all other Passover picture books? For starters, a giant yellow bird finds the afikomen. But what else would you expect from a seder on Rechov Sumsum, the Israeli equivalent to Sesame Street? Big Bird and his pals serve as delightful seder hosts as they relate elements of the Passover story and introduce concepts such as freedom and performing good deeds. While heading to Brosh’s house for the seder, Big Bird captures a runaway puppy and rescues Grover from a flowering sticker bush. Each helps to carry bags of groceries to a woman’s house. Along their circuitous route, Grover explains to Big Bird the story of the Jews’ enslavement in Egypt, recites the first of the Four Questions, and tells how matzah came to be. When the helpful pair becomes lost, they implore Moishe Oofnik, who is passing by in his ramshackle truck, for a lift. Moishe initially declines but quickly changes his mind when promised a dinner which includes bitter herbs. All finally reach the seder and enjoy being with friends and eating the delicious food. Young readers will instantly recognize Leigh’s renditions of the familiar and loveable Sesame Street residents. Just as Big Bird finds the hidden matzah, children will find a great deal to like about this Shalom Sesame book. Tilda Balsley is the author of Maccabee!: The Story of Hanukkah (2010), The Queen Who Saved Her People (2011), and Oh No, Jonah! (2012). This is part of a new series of Shalom Sesame books published by Kar-Ben that includes Count’s Hanukkah Countdown and It’s a Mitzvah, Grover.” —AJL Newsletter