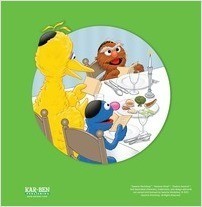 Grover and Big Bird are in a hurry to get to the Passover seder, but—uh, oh!—there are many delays. Moishe Oofnik comes to the rescue in his tumbledown truck, but will they arrive in time to ask the Four Questions?

“Both books are brightly illustrated and explain Jewish concepts clearly, simply, and without condescension. Solid purchases for Jewish preschool programs and other preschools wishing to introduce Jewish holidays and practice.” —School Library Journal

“Passover comes to vivid life in this fun and engaging tale from the Shalom Sesame series. As Grover and Big Bird make their way to Brosh and Avigail’s home for the Passover seder, a stalled bus gives them an opportunity to do mitzvot (good deeds), like helping a tired woman with her groceries and catching a runaway puppy, on the holiday’s eve. As they rush to their hosts’ home, Grover and Big Bird learn some common Hebrew words and find relevant moments to remember the Passover story and understand holiday traditions such as eating matzoh. Bright colors and humorous illustrations will draw in readers and inform and excite them about this important Jewish holiday.”—Publishers Weekly

“Why is this book different from all other Passover picture books? For starters, a giant yellow bird finds the afikomen. But what else would you expect from a seder on Rechov Sumsum, the Israeli equivalent to Sesame Street? Big Bird and his pals serve as delightful seder hosts as they relate elements of the Passover story and introduce concepts such as freedom and performing good deeds. While heading to Brosh’s house for the seder, Big Bird captures a runaway puppy and rescues Grover from a flowering sticker bush. Each helps to carry bags of groceries to a woman’s house. Along their circuitous route, Grover explains to Big Bird the story of the Jews’ enslavement in Egypt, recites the first of the Four Questions, and tells how matzah came to be. When the helpful pair becomes lost, they implore Moishe Oofnik, who is passing by in his ramshackle truck, for a lift. Moishe initially declines but quickly changes his mind when promised a dinner which includes bitter herbs. All finally reach the seder and enjoy being with friends and eating the delicious food. Young readers will instantly recognize Leigh’s renditions of the familiar and loveable Sesame Street residents. Just as Big Bird finds the hidden matzah, children will find a great deal to like about this Shalom Sesame book. Tilda Balsley is the author of Maccabee!: The Story of Hanukkah (2010), The Queen Who Saved Her People (2011), and Oh No, Jonah! (2012). This is part of a new series of Shalom Sesame books published by Kar-Ben that includes Count’s Hanukkah Countdown and It’s a Mitzvah, Grover.” —AJL Newsletter

Ellen Fischer was born in St. Louis. Following graduation from Washington University, she taught children with special needs and then ESL at a Jewish Day School. She lives in Greensboro, North Carolina with her husband. They have three children.

Tilda Balsley has written many books for Kar-Ben, bringing her stories to life with rhyme, rhythm, and humor. Tilda lives with her husband and their rescue Shih Tzu in Reidsville, North Carolina.

Tom Leigh is a children’s book author and longtime illustrator of Sesame Street and Muppet books. He lives on Little Deer Isle off the coast of Maine.