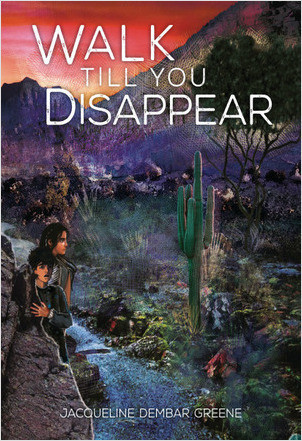 Miguel Abrano lives on the family horse ranch just outside Tucson in 1872. He is nearly 13 and thinks himself almost a man, certainly old enough to decide he would like to become a Catholic priest when he is adult. Still, his family treats him as if he is immature. One evening a travelling peddler reads aloud from a secret book belonging to Miguel’s father, and Miguel is shocked to discover his family is rooted not in the faith in which he has been raised, but in a faith he has devalued.

He runs away from the ranch and is captured by Apaches, who force him to march miles along rough terrain with them. After a risky escape he is found, hungry and in pain, by Rushing Cloud, an Indian boy who feeds him, brings him back to health and guides him to his people. Miguel learns much along the way about the wild country they are traversing back to Tucson.

Along with this Miguel realizes that many of his ideas about people and their beliefs are narrow and often incorrect. Soon he is able to use his newly-learned skills to help Rushing Cloud.

This is a classic tale of a youth finding his true self in the wilderness. Written for grade levels 3 to 7, it has much to offer not only about open-mindedness but also about analyzing beliefs to assess their ultimate truth. All this as the reader is fascinated by descriptions of the desert southwest, its flora and fauna and the need for water. Adding depth and value to this book is an afterword describing the history of the area, a glossary of unfamiliar terms and a bibliography. Recommended, especially for boys.