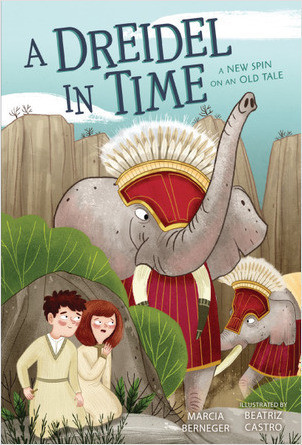 “This accessible chapter book tells the story of the events that led to the first Hanukkah. Devorah and Benjamin are disappointed when they receive an old dreidel from their Bubbe as a Hanukkah present. However, when they spin the dreidel, they are shocked to find themselves in ancient Modi’in with the Maccabees. Devorah and Benjamin land in the middle of the action as the Maccabees fight the soldiers of King Antiochus and try to reclaim their right to practice their religion. The two children have such an impact that it is implied that the Maccabees wouldn’t have succeeded without them. The miracle oil that lasted eight nights is briefly introduced at the end of the story. There are a couple of time jumps that break up the flow of the plot. The black-and-white illustrations enhance the action. All the characters are depicted as white. VERDICT A fun introduction to the story of Hanukkah. Recommended for libraries seeking Jewish stories for their early chapter book sections.”―School Library Journal