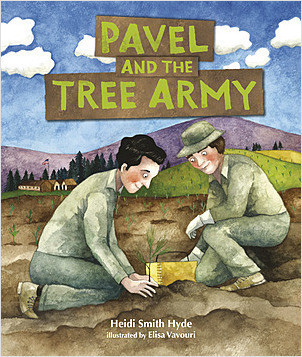 “In Depression-era America, Pavel, a Russian-Jewish immigrant, joins the Civilian Conservation Corps and learns to blend his new American identity with his Jewish one. On the advice of his rabbi, Pavel decides to take a job planting trees all over the country as part of the new program established by President Franklin D. Roosevelt. Arriving in Idaho, Pavel’s first impression is that this empty landscape seems quite foreign compared to a bustling, busy New York City, but Pavel is encouraged by the prospect of three meals a day and hard-earned money to help support his family. However, some of the men he meets on his team scrutinize Pavel’s accent and claim he cannot be a real American. Pavel wonders how he can prove that he is just as American as his co-workers. As the Fourth of July approaches, Pavel and his fellow immigrant workers learn the words to the newly declared national anthem, ‘The Star-Spangled Banner,’ and sing it at the fireworks display, proudly declaring their new American status. Demonstrative, stylized paintings feature an assortment of sturdy, earnest young men (all pale-skinned) dressed in blue/green uniforms planting a plethora of tree saplings. The author’s not-so-subtle metaphor illustrates how Pavel’s work allows him to feel rooted in his new country just as his plantings grow and thrive in today’s national parks and forests. A timely theme to emphasize America’s promise for each generation of newcomers.”—Kirkus Reviews