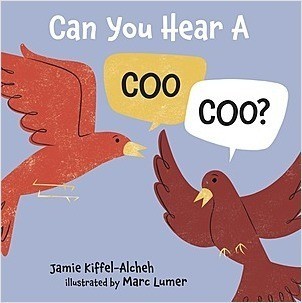 “Surprise, it’s a board book about Noah’s Ark, although readers might not immediately recognize the familiar story. At first glance this cheerful board book seems to be about animal sounds. Pairs of doves, mice, snakes, geese, zebras, monkeys, and tigers move noisily across the pages, two by two. The animal sounds are repeated twice, along with the words they rhyme with, both rendered in uppercase letters. So the mice ‘SKITTER, SKITTER’ and ‘TWITTER, TWITTER,’ while the geese say, ‘GIGGLE, GAGGLE,’ as their tails ‘WIGGLE, WAGGLE.’ Finally, tying this all together, on the second-to-last page, a brown-skinned family in vaguely Middle Eastern dress appears, along with pairs of elephants, horses, sheep, butterflies, worms, and giraffes. Even on the final spread, as the animals troop into the ark, Noah is not named. A rather generic but positive message concludes this abbreviated Bible story: ‘They know that in STORMY WEATHER / friends like these should STAY TOGETHER!’ That ‘stormy weather’ is the only reference to the Flood, and there’s no mention of God. Caregivers who want to disguise their Bible stories may be pleased, while others will be forced to add further explanation on their own. Toddlers will just be happy to repeat the animal noises. A playful, stealth introduction to a familiar tale. (Board book. 1-3)” – Kirkus Reviews