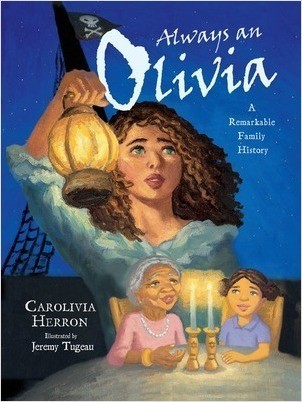 Herron offers an intriguing children’s story about a family that has a mixed background, based on her own multi-cultural family tree. Half of the family left Spain due to the Spanish Inquisition and then moved to Portugal. They lived in Portugal for many years while keeping their Jewish religion a secret. After a time, they moved to Venice, Italy, where they settled for many generations. One of the daughters was kidnapped because the kidnappers felt that a good ransom would be paid due to her Jewish background. The girl, Sarah Shulamit, was able to escape the kidnappers with the help of another kidnapped person by the name of James. In 1805 they settled in the United States. James and Sarah settled in Georgia in an area that had many families from West Africa. The families mixed, so their heritage became Black and Jewish. One name, Olivia, was always passed down to mother and daughter. Carol Olivia, the story’s modern-day protagonist, is lucky enough to hear this information from her great grandmother. This inspiring story can help children recognize the importance of culture and customs. It reinforces the need to keep the stories as well as family traditions alive. Always an Olivia is a great resource for an elemen-tary school class on many levels.