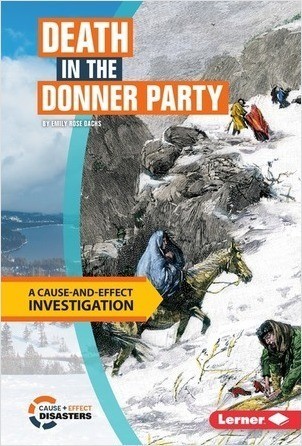 Grades 1 – 3, Grades 4 – 5: This nonfiction book gave me a much better understanding of how the Donner Party ran into so many problems as they were immigrating to California. They first decided to take Lansford Hastings shortcut which was suppose to take 350-400 miles off their trip. They had the guide for this shortcut and Landford said he would be there to help them through. When they got to the cut off Landford was not there. They sent some scouts to find him. When they did, Landford said do not go the way he said it was to hard. He told them another way but would not travel with them. They went the next way but ran into trouble with not having any water. One problem after another, they were in the Sierra and got stuck in stow storm and the pass was closed. By the time the made it to California almost half of their party died along the way. This was way different from most emigration camps that lost around 6% of their party.

Verdict: I gave this book a R rating, because it made it so easy to understand all the problems the Donner Party had.