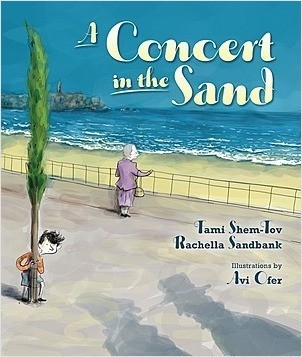 “This warm, delicious, slim volume is bona fide historical fiction about the first concert by the orchestra that will become the Israel Philharmonic. Humor laced mobile illustrations support the story of a mysterious walk that Uri, a young boy, takes with his grandmother in Tel Aviv in December 1936. The unfolding plot keeps youngsters engaged in the mystery surrounding the outing: where is grandma going? What are those men carrying in those funny shaped cases? As the grandson walks, he spies and seeks clues. We learn that grandma is a German-Jewish refugee from Nazism, safe but homesick in Palestine. She knows music and some of the musicians, especially the man who created this orchestra, violinist Bronislaw Huberman. He saved the lives of 70 musicians by taking them to play outside Europe. (The picture book itself does not delve into this sad Holocaust reason to start the orchestra, but the end note skims it.) Uri meets Huberman and gains a new, prideful view of his grandparent. Told in the first person by Uri, the picture book reveals not only his walk and the solution to his questions about the strangers, but his great relationship with his grandmother, the denizens of developing Tel Aviv and the emotional power of music; yes a teary eyed ending. By the end of the walk, the two are leading a parade of fisherman, construction workers, sales people, shoppers and sidewalk strollers into the auditorium. Arturo Toscanini is the conductor who brings the music from Uri’s ears to his heart: not to be missed by readers ages 4-9.”—Jewish Book Council