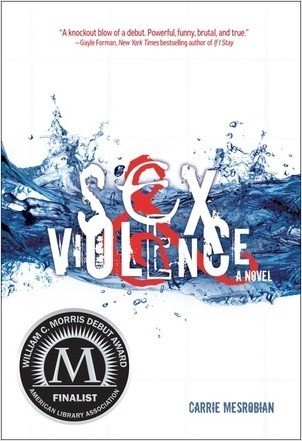 Evan Carter has always found one thing to be true for himself: he can have sex, and there’s never any consequences. Because he and his dad move around so much, Evan doesn’t stay in any one place long enough to have to make connections with people. So he uses his strategy: find The Girl Who Would Say Yes, and get down. This is foolproof until it isn’t. Until he picks the wrong girl, and pays dearly for it. After the assault, Evan and his dad pack up and move to a small lakeside town in Minnesota, and it’s there that Evan starts to heal–and deal with the fact that making connections with people is messy but kind of wonderful, too.

Carrie Mesrobian’s debut novel tackles some big issues, as the title suggests. The novel handles these issues with grace and aplomb, but what’s truly remarkable is how concerned Mesrobian is with the “after” of these big issues. This debut novel is gripping, achingly real, and absolutely unforgettable. One of the best reads of the year, this one is not to be missed.

Evan’s first-person narration is startlingly authentic, and his intense, sometimes uncomfortably frank inner-monologue will affect readers. Evan has a dark side to him, but he’s aware of it, and part of this process of healing means tackling that dark side. He’s often lewd, but it feels realistic, and the book is full of great dialogue between its characters, and this dialogue is often very funny.

The novel is packed with ideas about sex and violence and how the two are connected, but Mesrobian doesn’t offer her characters or her readers any easy answers. There’s subtle exploration of why Evan is the way he is, and what it will take for him to become a good person–and a good man–but it never feels too convenient or cliche. In Mesrobian’s capable hands, Evan’s plight is always sympathetic, and readers will root for him–even when he’s being a giant douche bag.

A cast of well-rounded, interesting secondary characters elevate this gripping story even further. There’s no shortage of vivid characters who populate Evan’s new world, but they’re all distinct, and readers will enjoy reading about Evan’s interactions with these people as he comes to grips with his new life. This is an all-around excellent first novel. I can’t wait to see what Mesrobian does next.