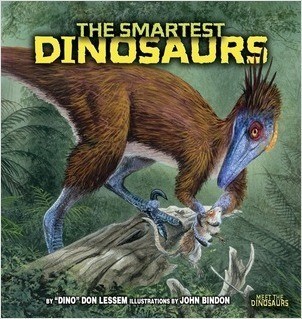 “Lessem is known as ‘Dino Don,’ having written 30 kids’ books and a column for Highlights on the topic. He also served as an advisor for the movie, Jurassic Park. Who better to write this exciting series? (Other titles include armored dinosaurs, deadliest dinosaurs, and giant plant-eating dinosaurs.) Scientists compare the size of a dinosaur’s brain to its body to estimate the animal’s intelligence. The troodon, a meat-eating dinosaur the size of a large poodle, may have been the smartest dinosaur. Other creatures smarter than the average bear – us, make that average dino—were velociraptors, the fleet-footed Gallimimus, the gliding microraptors, and the terrible T-rex. The attractive art shows the likely habitats of these smart dinosaurs in unexpected detail.” —California Kids!