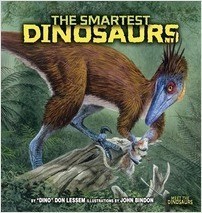 From the Series Meet the Dinosaurs

“Dino” Don Lessem brings readers face-to-face with various dinosaur species, detailing their habitats, way of life and how they became extinct. An acclaimed dinosaur expert, Don Lessem has written more than 30 children’s books, writes a popular dinosaur column in Highlights magazine, and was an adviser for Jurassic Park. Take a trip through dinosaur time to meet these smart dinosaurs face-to-face: Troodon were the smartest dinosaurs! They would dig their prey (small rodents) out of the ground and could predict the movements of bugs! Giganotosaurus can recognize many dinosaurs from very far away by their smell! The Deinonychus worked together to sneak up on and surround their prey! Plus, you’ll get to know Gallimimus, Laellynasaura, Microraptor, and Tyrannosaurus Rex!

“Lessem is known as ‘Dino Don,’ having written 30 kids’ books and a column for Highlights on the topic. He also served as an advisor for the movie, Jurassic Park. Who better to write this exciting series? (Other titles include armored dinosaurs, deadliest dinosaurs, and giant plant-eating dinosaurs.) Scientists compare the size of a dinosaur’s brain to its body to estimate the animal’s intelligence. The troodon, a meat-eating dinosaur the size of a large poodle, may have been the smartest dinosaur. Other creatures smarter than the average bear – us, make that average dino—were velociraptors, the fleet-footed Gallimimus, the gliding microraptors, and the terrible T-rex. The attractive art shows the likely habitats of these smart dinosaurs in unexpected detail.”
—California Kids!

“Attractive, realistic illustrations keep pace iwth a simple text . . . this is a clear look at a facet of dinosaur makeup not often touched on in other works.”
—School Library Journal

“the information is thorough and well organized around scientific concepts. The color illustrations feature often fierce feathered dinosaurs or reptiles in various acts of survival.”
—The Horn Book Guide

“Dino” Don Lessem introduces readers to various species of dinosaurs, some that have never before been illustrated. He details their habitats, way of life and how they became extinct. These high interest books will capture kids’ attention with fun facts and colorful illustrations and… View available downloads →