eSource: Dulcinea in the Forbidden Forest 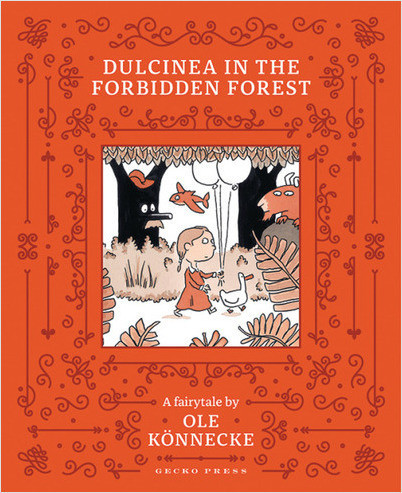 A funny and contemporary illustrated fairy tale about a strong heroine who saves the day, perfect for early readers.

Brave Dulcinea has known since she was small not to enter the dangerous magic forest where the witch has her castle. But her father hasn’t come home from collecting blueberries for her birthday pancakes. Did the witch cast a spell on him?

Dulcinea must brave the dark forest and sneak into the witch’s castle to steal the spell book and free him. Her father would hardly have named her after the brave Dulcinea if she couldn’t break a witch’s spell to celebrate her birthday with him!

Ole Könnecke’s funny, comic-style illustrations and humorous story turn the classic fairy tale on its head. Children aged 5 to 9, or young readers just starting out on independent reading, will love cheering on the brave and capable Dulcinea as she saves her father and gets him home just in time for pancakes.

Translated from the German edition by Shelley Tanaka.

“It’s a well-told tale with an indefatigable heroine, and an interplay of words and pictures that feels as if it shares lineage with Quentin Blake and Roald Dahl.”—The New York Times

Ole Könnecke was born in Germany, and lives as an illustrator in Hamburg. He is also the German translator of Ulf Nilsson’s Detective Gordon chapter book series.

Other books by Ole Könnecke:
You Can Do It, Bert! Bank Street CBC Best Children’s Book of the Year
The Big Book of Words and Pictures
Sports Are Fantastic Fun
Anton Can Do Magic

Praise for Dulcinea in the Forbidden Forest
”It’s a well-told tale with an indefatigable heroine, and an interplay of words and pictures that feels as if it shares lineage with Quentin Blake and Roald Dahl. A fine winter evening read-aloud, to be enjoyed next to a warm fire with a plate of cookies. Or, you know, “biscuits.”—The New York Times

“This fairy tale is updated with some attitude and a gentle poking of fun at fairy-tale tropes. There are also some seriously funny illustrations. The juxtaposition of Dulcinea’s earnest, often deadpan mien and the witch’s over-the-top dramatic expressions is priceless.”—Kirkus Reviews

“‘Könnecke offers gentle comedy throughout: “Besides, nothing bad could happen to you on your birthday, could it?’ Concise chapters move the pace along as readers follow Könnecke’s inky, black-outlined art in a tale for those who love magic, fairy tales, and blueberries on their pancakes."—Publishers Weekly