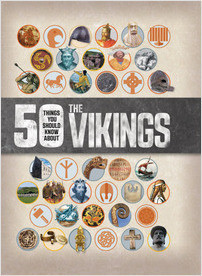 50 Things You Should Know About the Vikings

From the Series 50 Things You Should Know About

Known for their vicious raids, love of treasure, and fierce warriors: the Vikings were the most feared invaders of the Medieval period.

For 300 years, they terrorized the world in their hunt for land and power, but they also had a rich culture in art, literature, and law. Packed with facts, maps, infographics, and photos, this is the perfect introduction to the most feared invaders of the Middle Ages. Covering where they came from and who they conquered, their commerce and culture (including their bloodthirsty stories), their travel and trade, and the reasons behind their demise, this complete guide provides a comprehensive exploration of who these peoples were – and who they were not. For while there is no doubt that some Vikings launched bloodthirsty attacks in this period, pillaging communities and plundering treasure, many more were peaceful traders and settlers. Going beyond the fearsome warriors, battles, and adventures we associate with Vikings, this detailed book provides an insight into the everyday life of the people, to examine how and what they traded, what Viking village life was like, and how they made and sailed their famous long ships. It explores the rich culture of the Vikings, including the beautiful art they created, the legendary stories they told, and the complex law systems they built to maintain a civilized society as well as how their culture and influence lives on in the world today.

Anna Claybourne is an award-winning children's author based in Edinburgh, Scotland. She specializes in writing about science and nature, and has written well over 100 books to date.