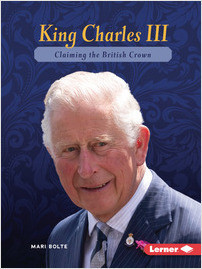 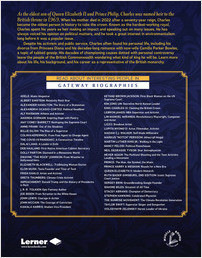 As the eldest son of Queen Elizabeth II and Prince Philip, Charles was named heir to the British throne in 1969. When his mother died in 2022 after a seventy-year reign, Charles became the oldest person in history to take the crown. Known as the hardest-working royal, Charles spent his years as heir making an impact and speaking out on many issues. He has always voiced his opinion on political matters, and he took a great interest in environmentalism long before it was a popular issue.

Despite his activism and public service, Charles often found his personal life, including his divorce from Princess Diana and his decades-long romance with now-wife Camilla Parker Bowles, a topic of tabloid gossip. His decades of championing causes dotted with personal controversy leave the people of the British Commonwealth wondering what kind of king he will be. Learn more about his life, his background, and his career as a representative of the British monarchy.

Mari Bolte has worked in publishing as a writer and editor for more than 15 years. She has written dozens of books about things like science and craft projects, historical figures and events, and pop culture. She lives in Minnesota.