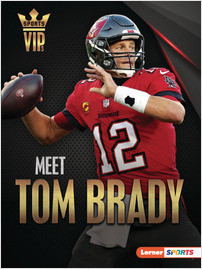 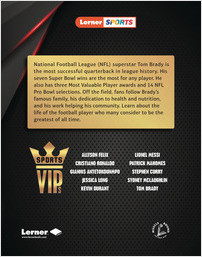 Quarterback Tom Brady set a record by winning six Super Bowls with the New England Patriots. In 2021, he led the Tampa Bay Buccaneers to the title. Explore his life on and off the field.

“The illustrated “Sports VIPs” series is designed to give young fans an up-close look at the lives and achievements of some of the greatest athletes of modern times. In each book, some of the career-defining moments of the spotlighted athlete are presented. Such important moments are used as a jumping off point to present readers with biographical information designed to give a fuller look at the athlete and their accomplishments. Each volume in this sports biography series enables readers to learn about the background, family life, accomplishments, and setbacks that have led to such highly acclaimed careers. All of this is illustrated with numerous color photographs of the featured athlete in action. At the end of the book, readers will find career statistics and a list of additional they can use for more in-depth analysis of their performance. In this addition to the series, the featured athlete is Tom Brady, perhaps the greatest athlete to ever play in the National Football League (NFL). Tom Brady has won seven Super Bowls and holds numerous NFL passing records. Selected in the sixth round of the 2000 NFL draft after six other quarterbacks had already been drafted, Brady began his professional football career with a great deal to prove. Brady started as the New England Patriots’ backup quarterback and only began to start games when their star quarterback, Drew Bledsoe, was injured. Once Brady was ensconced as the Patriots starting quarterback it quickly became clear that he was a supremely talented player. During his years with the Patriots, Tom Brady led his team to six Super Bowl victories, set numerous passing records, and generally dominated the NFL. In 2020, Brady became a free agent and signed with the Tampa Bay Buccaneers. He led the Buccaneers to the Super Bowl, where they upset the favored Kansas City Chiefs. Over the years, Tom Brady has staged some of the most remarkable comebacks in NFL playoff history, set numerous records, won multiple MVP awards, and generally performed at such a high level as to arguably be the greatest NFL player of all time. This book does a solid job of presenting the extraordinary level of performance and success make that Tom Brady a stellar athlete. Reviewer Rating: 4" —Children’s Literature