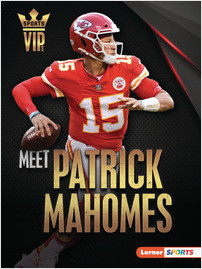 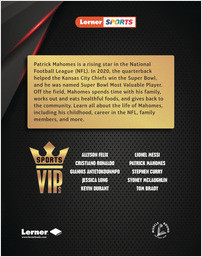 Quarterback Patrick Mahomes led the Kansas City Chiefs to Super Bowl victory in 2020. That year, he signed a record-breaking contract with the team. Learn about the superstar’s life on and off the field.

“The illustrated “Sports VIPs” series is designed to give young fans an up-close look at the lives and achievements of some of the greatest athletes of modern times. In each book, some of the career-defining moments of the spotlighted athlete are presented. Such important moments are used as a jumping off point to present readers with biographical information designed to give a fuller look at the athlete and their accomplishments. Each volume in this sports biography series enables readers to learn about the background, family life, accomplishments, and setbacks that have led to such highly acclaimed careers. All of this is illustrated with numerous color photographs of the featured athlete in action. At the end of the book, readers will find career statistics and a list of additional they can use for more in-depth analysis of their performance. In this book, it is Patrick Mahomes, star quarterback for the Kansas City Chiefs, whose life and achievements are highlighted for readers. Mahomes began his professional football career in 2017 when he was drafted by the Chiefs. Although Mahomes sat on the bench for virtually all of that rookie season, he quickly demonstrated in his second year just how exceptional his talents were. At the Super Bowl just three years later, Mahomes faced one of the greatest challenges of his football career. Against the San Francisco 49ers, down by ten points in the fourth quarter, Mahomes helped stage a massive comeback. After leading his team to three touchdowns, Mahomes not only spearheaded the Chiefs’ Super Bowl triumph but also earned recognition as the MVP of the championship game. To date, Patrick Mahomes has had as successful a first four years in the NFL as any other quarterback who has ever played in the league. A star baseball player in high school and college, Mahomes is a multi-talented athlete who has achieved great success. The story of this amazing football player is ably presented in this slim volume. It is a tale than young football fans will both enjoy and appreciate. Reviewer Rating: 4"—Children’s Literature