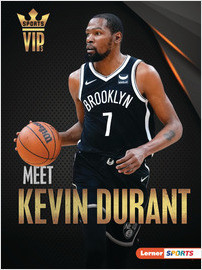 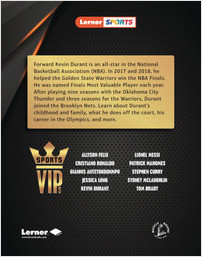 Brooklyn Nets forward Kevin Durant has twice won the NBA Finals with the Golden State Warriors. Sports fans will thrill in learning about the MVP’s greatest moments both on and off the court.

“The illustrated “Sports VIPs” series is designed to give young fans an up-close look at the lives and achievements of some of the greatest athletes of modern times. In each book, some of the career-defining moments of the spotlighted athlete are presented. Such important moments are used as a jumping off point to present readers with biographical information designed to give a fuller look at the athlete and their accomplishments. Each volume in this sports biography series enables readers to learn about the background, family life, accomplishments, and setbacks that have led to such highly acclaimed careers. All of this is illustrated with numerous color photographs of the featured athlete in action. At the end of the book, readers will find career statistics and a list of additional they can use for more in-depth analysis of their performance. Basketball superstar Kevin Durant is the focus of this book in the series. Durant has excelled at basketball since his high school days. In college, he was a dominating player, and he was the second player selected in the 2007 National Basketball Association (NBA) draft. Durant played his first NBA season with the Seattle Supersonics, where he won the Rookie of the Year Award. The next year, the Supersonics relocated to Oklahoma City and were renamed the Thunder. The team was outstanding, and Durant excelled while playing there. Still, the team failed to win a championship, so in 2016, Durant left via free agency and signed with the Golden State Warriors, a team that had beaten the Thunder in the playoffs. Joining such stars as Steph Curry and Klay Thompson, Durant became part of one of the greatest teams in NBA history. With the Warriors, he won two NBA championships. Durant suffered a torn Achilles tendon during the 2019 NBA Finals and was subsequently traded to the New Jersey Nets, where he still plays at a very high level. The winner of two NBA championships and several Olympic Gold Medals for basketball, Kevin Durant is also a charitable person. When a destructive tornado struck Moore, Oklahoma in 2013, Kevin Durant donated $1,000,000 to help families rebuild their homes. This talented athlete is presented in this book in ways that will engage readers with an interest in athletics, especially basketball. Reviewer Rating: 4" —Children’s Literature