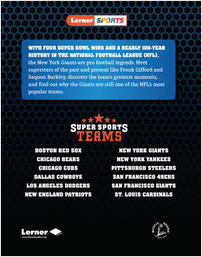 Inside the New York Giants

The New York Giants have played football for almost one hundred years. Explore the team’s long history, epic moments, most legendary players, and much more.

“The illustrated “Super Sports Teams” series is designed to give young readers an introduction to professional baseball and football teams that have captured the hearts of fans. Each book in the series spotlights critical games, coaches, and star players who have helped shape the history of the featured team. In this selection from the series, the central topic is the New York Football Giants. Founded in 1925, the Giants were named after the enormous skyscrapers that dot the landscape of New York City. The official name of New York Football Giants was coined to differentiate the team from the Major League Baseball New York Giants, with whom they initially shared a home stadium. Over the years, the Giants have had periods of great success and utter frustration. In the 1950s and early 1960s, the Giants were a dominant team that won one National Football League (NFL) title while participating in a half-dozen league championship games. The team has also played in five Super Bowls, winning four of them. In three of their Super Bowl victories, the Giants were distinct underdogs and won in dramatic fashion. Over the years, the Giants have fielded teams that have included some of the greatest players ever to play in the NFL. Stars such as Lawrence Taylor, Odell Beckham Jr., Phil Simms, Eli Manning, and Tikki Barber all demonstrated amazing football prowess. In recent years, the Giants have been a very frustrating team to watch as they have generally had mediocre records. However, Giant fans continue to love their team, even when it seems painful to do so. The story of this historic football team is well represented in this introductory sports book. Filled with colorful photography, this is a book that will bring its subject to life and entertain young sports fans. Reviewer Rating: 4" –Children’s Literature 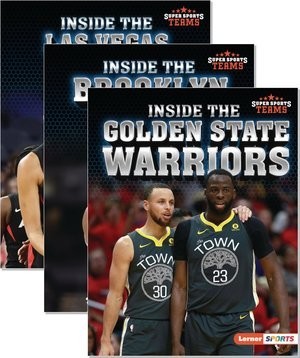