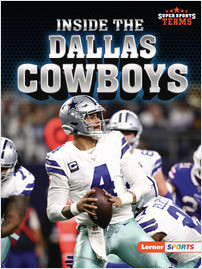 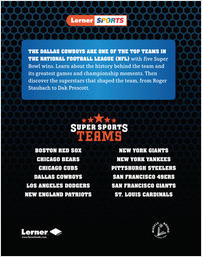 Inside the Dallas Cowboys

The Dallas Cowboys are nicknamed America’s Team, and they’re one of the world’s most valuable and popular sports teams. Discover the history of this NFL juggernaut and find out what’s next for America’s Team.

“The illustrated “Super Sports Teams” series is designed to give young readers an introduction to professional baseball and football teams that have captured the hearts of fans. Each book in the series spotlights critical games, coaches, and star players who have helped shape the history of the featured team. In this selection from the series, readers will learn about the Dallas Cowboys, a professional football team nicknamed “America’s Team.” Originally founded in 1960 as an expansion team, the Dallas team was originally supposed to have a different name than Cowboys. It was supposed to be called the Steers or the Rangers, but those were replaced by the current moniker during the naming process. After five years of losing records, the Cowboys became a winning team in 1966. For the next thirty years, the team was often considered a top contender, playing in eight Super Bowls and winning five of them. Coached by such great football leaders as Tom Landry and Jimmy Johnson, the Cowboys have a history of innovation and excellence. Star players such as Roger Staubach, Troy Aikman, Tony Romo, Emmitt Smith, Tony Dorsett, Bob Lily, and Michael Irvin have entertained Cowboy fans and helped lead the team to victories. While the Cowboys have not won a championship since 1996, the franchise remains one of the most popular and financially successful teams in all of professional sports. As readers of this well written and amply illustrated book will learn, the Dallas Cowboys are valued at six and a half billion dollars and play in one of the largest and most modern stadiums in all of North America. Readers with an interest in the National Football League, and professional sports in general, will find this slim book to be both informative and entertaining. Reviewer Rating: 4"–Children’s Literature