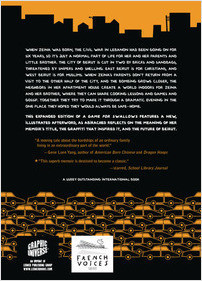 A Game for Swallows: To Die, To Leave, To Return

This expanded edition of A Game for Swallows features a new, illustrated afterword, as Abirached reflects on the meaning of her memoir’s title, the graffiti that inspired it, and the future of Beirut.

The city of Beirut is cut in two, separated by bricks and sandbags and threatened by snipers and shelling. East Beirut is for Christians, and West Beirut is for Muslims. When Zeina’s parents don’t return one afternoon, the neighbors in her apartment house create a world indoors for Zeina and her brother, sharing cooking lessons, games, and gossip. Together they try to make it through the day in the one place they hoped would always be safe—home.

Zeina Abirached was born in Beirut in the middle of the civil war. She studied graphic arts in Lebanon but moved to Paris in 2004, where she attended the National School of Decorative Arts. In 2006, she published her first two graphic novels with publisher Cambourakis, Beyrouth-Catharsis and 38, Rue Youssef Semaani. Her short animated film Mouton was nominated during the fifth international film festival in Tehran. A Game For Swallows (Graphic Universe, 2012) has won numerous awards, including being named an ALA Notable Children's Book and a YALSA Great Graphic Novel for Teens. Je Me Souviens Beyrouth (I Remember Beirut), the follow-up to A Game For Swallows, was published in French by Cambourakis in 2008.