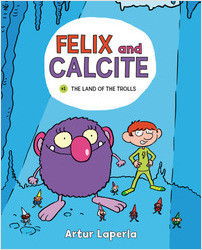 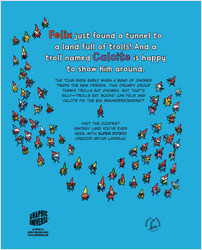 The Land of the Trolls

From the Series Felix and Calcite

Felix has just found a tunnel to a land full of trolls!

A troll named Calcite is happy to show him around, but the tour ends early when a band of gnomes captures the new friends. That means tiny arrows from tiny bows. The little archers think trolls eat gnomes, but that’s silly—trolls eat rocks! Can Felix and Calcite fix this big misunderstanding?

“Startled awake by a terrible smell, Felix traces the source to a little girl troll named Calcite. She is equally surprised at finding she is in a human home. Together, they retrace the trail she followed and arrive at the land of the trolls. After meeting a few of Calcite’s friends, Felix and his new pal continue to venture and find themselves surrounded by a bunch of vengeful gnomes. The angry crowd believes that trolls have been eating them. This first book in Laperla’s new comic/graphic novel series for younger readers features picture book binding to ease transition to the genre. While it is on the long end, it still falls within picture book length. Illustrations dominate the text, including some full-page blocks. The dialogue and captions are rendered in comics-style caps, and the vocabulary is age-appropriate; while it is not as simple as a first reader, it is well-suited to chapter book readers. Younger children will enjoy having the book read to them, as well. As might be expected in a book about trolls and gnomes, there is some mildly disgusting discussion about boogers, as well as some peril, with gnomes shooting arrows at Felix and the trolls. However, no one is seriously hurt because the gnomes and their arrows are tiny, and the trolls are not actually eating the gnomes. Some fun interactive features include an introductory maze and a couple of Where’s Waldo-type searches, one for Calcite on a blue and white page and one for a specific gnome to find somewhere the book. Reviewer Rating: 4”—Children’s Literature

“[A] fun, fast read . . . The cartoonish style; eye-catching, bright color scheme; and inclusion of a maze and an eye-spy game (plus a promise that Felix will indeed return to visit his friend) will likely entice readers.”—School Library Journal

Artur Laperla is an author and illustrator who lives in Spain. His work includes the Super Potato series and the Felix and Calcite series. 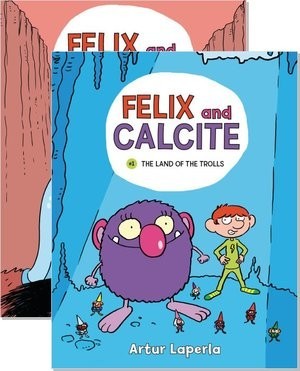