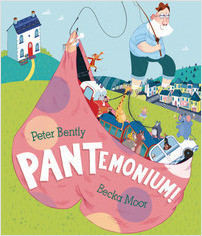 Fred the Giant’s off fishing today. But look! His GIANT PANTS are caught on the end of his hook!

Follow Fred as he drags his giant pants all around town, scooping up a cat, the baker and all his cakes, a fire engine . . . you’d be amazed how much fits in those megapants. What pantemonium!

“PANTemonium is a silly, rhyming, story about a man named Fred who decides to go fishing one day and without knowing it, catches his favorite underwear on the end of his hook! As he walks along the road to his favorite fishing spot, his underwear scoops up what he passes by. As his walk goes on the items get more and more far-fetched. Eventually he has most of the town, people, and even zoo animals riding along inside of his stretchy, polka-dotted underwear! When he finally arrives at his favorite fishing spot all of the things he’s caught along his walk go free and he wonders how all of these things got to the beach. He casts his trusty fishing pole and into the water goes his underwear for one final catch! A Whale! Kids will love this silly, carefree book mostly because it’s about underwear. Parents and teachers will enjoy the easy flow of the story, thanks to the rhyming. Reviewer Rating: 5” –Children’s Literature

Peter Bently lives in England. He studied languages at Oxford University and has written more than 40 titles, one of which led to him win the Roald Dahl Funny Prize 2011.

Becka Moor studied illustration for children's publishing at Glyndwr University. Since then, she has worked on a variety of young fiction, nonfiction, and picture books, and she was shortlisted for the Waterstones Children’s Book Prize. Becka lives and works in the UK.

Here are the highlights from our publishing partners’ Spring 2022 lists! From picture books to graphic novels, nonfiction about perennial favorite topics like space and dinosaurs, diverse eReadalongs, board books, and high-low fiction, there’s something for everyone from our favorite… View →