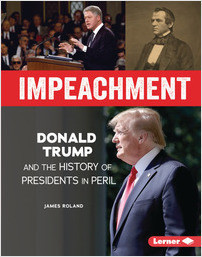 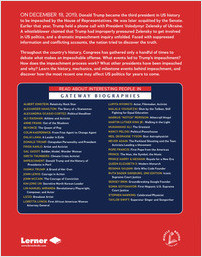 Donald Trump and the History of Presidents in Peril

On December 18, 2019, Donald Trump became the third president in US history to be impeached by the House of Representatives. He was later acquitted by the Senate. Earlier that summer, Trump held a phone call with President Volodymyr Zelensky of Ukraine. An unknown whistleblower raised concerns about the call, claiming that Trump had improperly pressured Zelensky to get involved in US politics. Over the following months a dramatic impeachment inquiry unfolded. Fraught hearings played out on television while Democrats and Republicans traded interpretations, arguments, and even insults. Faced with suppressed information and conflicting accounts, the nation tried to discover the truth.

In over two hundred years Congress has gathered only a handful of times to debate what makes an impeachable offense. What events led to Trump’s impeachment? How does the impeachment process work? What other presidents have been impeached, and why? Learn the history, mechanics, and milestone events behind impeachment, and discover how the most recent one may affect US politics for years to come.