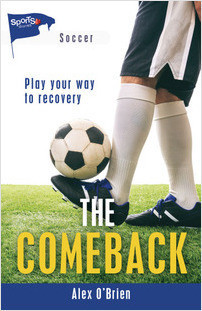 On the surface, fourteen-year-old Chris is pretty average, playing hockey and having friends. But underneath it all, Chris is depressed. He quits his hockey team, but his doctor suggests that he should pick up another sport. Chris starts playing soccer, and the positive benefits of sport start to take effect. But former hockey teammate Trent is on the team, and his suspicions about Chris and his mental health threaten Chris’s acceptance and recovery. When Chris and Trent are chosen to play in a summer tournament, Chris decides to keep his depression a secret. But will rumors and stigma about his condition make him backslide and turn his own team against him? Find out in this sensitive high/low middle grade title.

Alex O'Brien has played, watched, and coached several sports extensively. It was only natural that he'd come to write sports novels revealing the excitement and growth offered through competition.