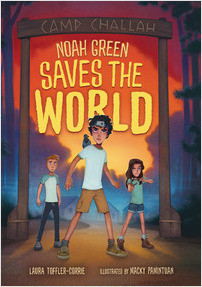 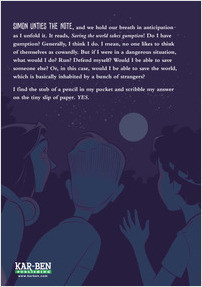 Noah is a would-be filmmaker who has trouble making friends and understanding people. In Noah Green Saves the World, by Laura Toffler-Corrie, Noah thinks that this summer, the best place for him is the David Lynch Film Camp, to work on his film “opus,” and not his parents’ choice, Camp Challah, to work on his bar mitzvah project. But before camp starts, Noah’s grandfather “Pops” takes him aside, along with Simon, a new arrival but not quite friend, and tells them both “It’s up to you to save the world!” Is Pops just confused, or is he onto something? When a pigeon flies into camp carrying mysterious messages, Noah and Simon wonder if maybe they do really have to save the world. With help from his new friends, Josh, Tyler, environmentalist and upcoming singer-songwriter Mia, and even his popular sister Lily, Noah finds that he can make films, make friends, do his bar mitzvah project, and maybe even save the world after all.

“Any child who loves the Jewish camping experience will be thrilled to read this book. In fact, even parents who fondly remember their own Jewish camping sleep-a-way days might sneak this book out of their child’s room so they can reminisce.” — Sydney Wasserman, Sydney Taylor Shmooze

“However, at its core, this is the story of Noah and his friends navigating the middle-school social scene, confronting bullies and their own self-doubt, and contemplating what doing tikkun olam (‘helping to fix what’s wrong in the world’) might look like for them” — Rebecca Fox, Children’s Librarian II, Boston Public Library, Boston MA, AJL Newsletter

Macky Pamintuan was born and raised in the Southern Philippines. He received his Bachelor of Fine Arts degree from the Academy of Art College in San Francisco. In addition to illustrating, Macky enjoys playing basketball, his other true passion. He lives in the Philippines with his wife, baby girl, and a West Highland white terrier named Winter.