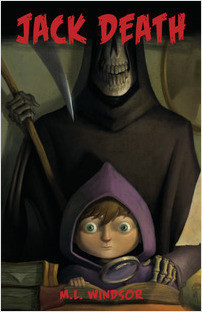 Jack is an ordinary boy except that his father happens to be Death. Nadine is a perfectly normal girl except that her Mother is—oh well, that’s a Secret and not to be carelessly revealed on the back cover of a book. The important thing is that together, these two incredibly average children discover the lemon-headed villain behind the destruction of the Magical Creature Reserve and piece together his plot to divide the Golden and Black Bloods. They may even save a few lives.

With story elements reminiscent of Percy Jackson and Lemony Snicket, flavored with a smattering of Harry Potter and Terry Pratchett and recounted in an arch, tongue-firmly-in-cheek style, this story will find an eager audience in upper elementary through middle school.

The intrusive and mysterious narrator provides know-it-all asides and rich vocabulary as background to the abundant action. There is plenty of comic violence and slapstick to keep the most reluctant reader engaged, but enough interesting language and subtlety that a more bookish reader won’t feel underestimated. Stock characters—the school bully, the absent-minded professor, the damsel in distress—often turn out to have more to them that first meets the eye.

M.L. Windsor is a 2012 Harvard graduate and full-time writer who develops content for educational test prep companies and freelances for publishers, including a micropress and literary journal called Midwestern Gothic.