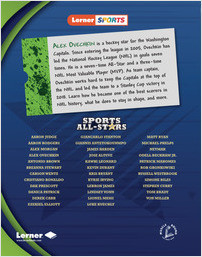 Alex Ovechkin is a hockey star for the Washington Capitals. Since entering the league in 2005, Ovechkin has led the National Hockey League (NHL) in goals seven times. He is a seven-time All-Star and a three-time NHL Most Valuable Player (MVP). As team captain, Ovechkin works hard to keep the Capitals at the top of the NHL and led the team to Stanley Cup victory in 2018. Learn how he became one of the best scorers in NHL history, what he does to stay in shape, and more.