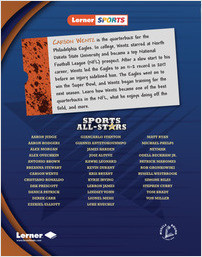 Carson Wentz is the quarterback for the Philadelphia Eagles. In college, Wentz starred at North Dakota State University and became a top National Football League (NFL) prospect. After a slow start to his career, Wentz led the Eagles to an 11–2 record in 2017 before an injury sidelined him. The Eagles went on to win the Super Bowl, and Wentz began training for the next season. Learn how Wentz became one of the best quarterbacks in the NFL, what he enjoys doing off the field, and more.