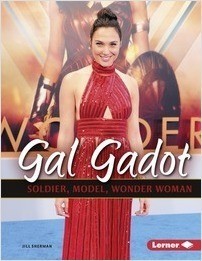 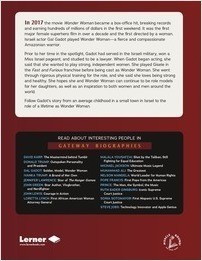 In 2017 the movie Wonder Woman became a box-office hit, breaking records and earning hundreds of millions of dollars. Israeli actor Gal Gadot played Wonder Woman—a fierce and compassionate Amazonian warrior. Prior to her time in the spotlight, Gadot served in the Israeli military, won a Miss Israel pageant, and studied to be a lawyer. When Gadot began acting, she wanted to play strong, independent women. She hopes to be a role model for her daughters as well as an inspiration to both women and men around the world. Follow Gadot’s story from an average childhood in a small town in Israel to the role of a lifetime as Wonder Woman.

“Readers looking for information about Wonder Woman and Gadot will find this a timely and very positive account of the actress’ life.”—Booklist